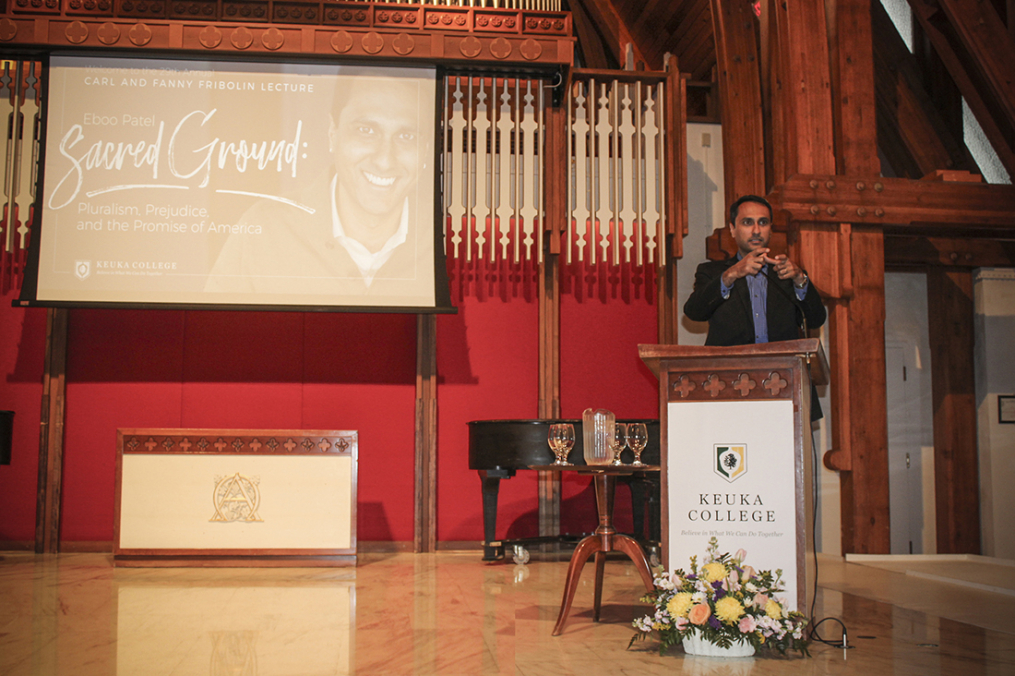 The founder of a global interfaith youth movement pulled a page from Keuka College’s past – the historic visit of Rev. Dr. Martin Luther King Jr. – to make the case for interfaith leadership Friday, May 5, during the College’s 29th Annual Carl and Fanny Fribolin Lecture.

The lecture capped Fribolin Fest – a day of events and activities on campus dedicated to celebrating diversity and social justice.

“Bridges don’t fall from the sky; people build them,” said Patel, who was tapped to serve on President Obama’s Advisory Council of the White House Office of Faith-Based and Neighborhood Initiatives. “If we want a society in which the relationships between people who orient themselves around religion differently … (are) characterized by bridges of cooperation, rather than bunkers of isolation, or barriers of division, or bludgeons of domination … we’re going to have to nurture a critical mass of people who are committed to building those bridges: Interfaith bridge builders. Interfaith leaders.”

Patel describes King as “someone who retrospectively fits the bill,” in that he increasingly sought out, studied, and learned from other religious teachings. He gave King’s adoption of Mahatma Gandhi’s nonviolent political movement in India as one example.

When city leaders in Birmingham, Ala., asked King to lead what would become the city’s famous bus boycott in the mid-1950s, said Patel, “King thinks in his head, ‘We are gonna go Gandhi on this town.’”

King was a fitting focal point for Patel’s lecture. Just hours earlier Friday, a bronze bust of King was unveiled at the College’s Lightner Library to commemorate his 1963 Baccalaureate address at the College. A bust of Eleanor Roosevelt – who also visited the campus, and encouraged establishment of its nursing program – was likewise unveiled at the 3:30 p.m. ceremony.

“He visited this college in 1963,” Patel said of King. “We all are pilgrims on the path he pioneered: The path of interfaith leadership. The commitment to be the kind of person who learns from other religious traditions; who partners with people who orient around religion differently; who creates spaces, who writes narratives, who shapes activities that bring people from different religious traditions together in ways characterized by understanding and cooperation.”

Also speaking at the Fribolin lecture was the Hon. Colleen A. Brown, Chief United States Bankruptcy Judge for the District of Vermont, who has conducted dozens of naturalization ceremonies. Like Patel, she spoke on the importance of pluralism. The U.S., she said, is far better characterized as a collage than a melting pot.

“It is by welcoming and integrating people from around the world that the United States has become the country it is today,” said Brown, who estimates she has helped naturalize some 2,500 new citizens.

The focus prompted College President Dr. Jorge Díaz-Herrera to reflect on his own journey.

“The only reason why I’m here is because of the opportunities this country has afforded to me,” Dr. Díaz-Herrera, a U.S. citizen who was born in Venezuela, said from the podium. “Without the opportunities, I wouldn’t be here. So I thank you for accepting me as your fellow citizen.”

Dr. Díaz-Herrera also presided over the unveiling of the sculptures of King and Roosevelt Friday afternoon during a ceremony attended by some 100 guests. The works were commissioned by Keuka College Trustee Donald Wertman and his wife, Christine, and crafted by Professor Emeritus of Art Dr. Dexter Benedict. 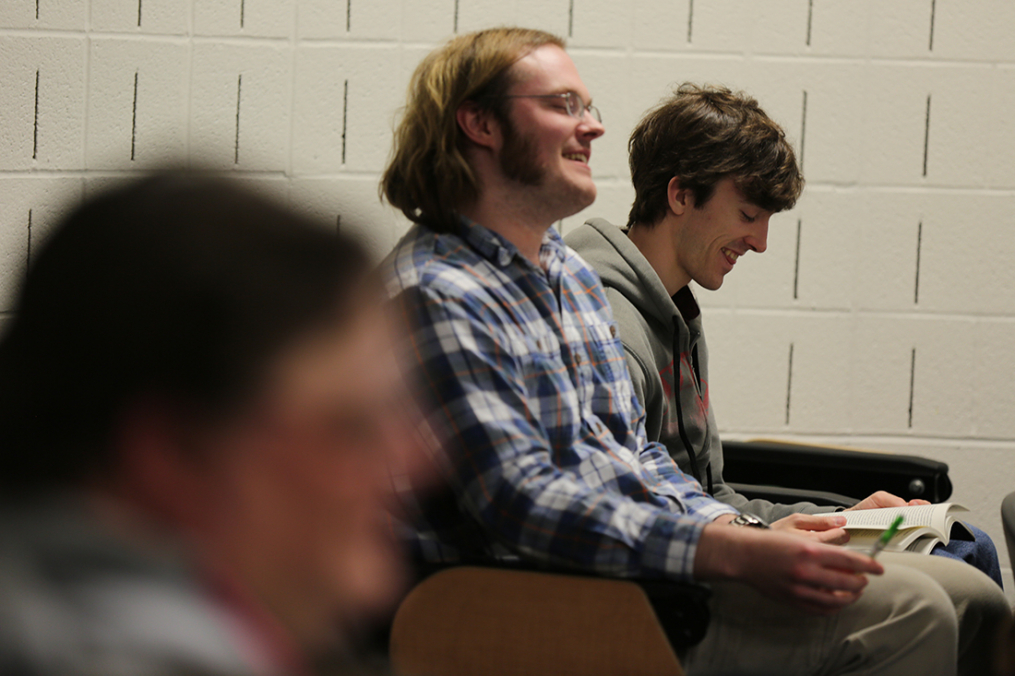 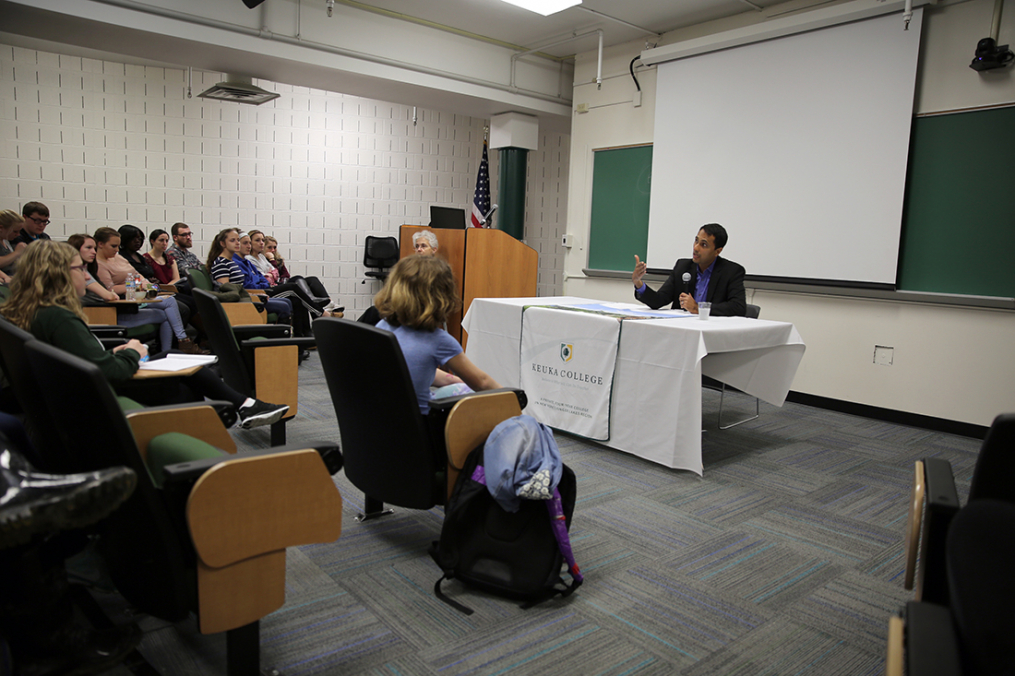 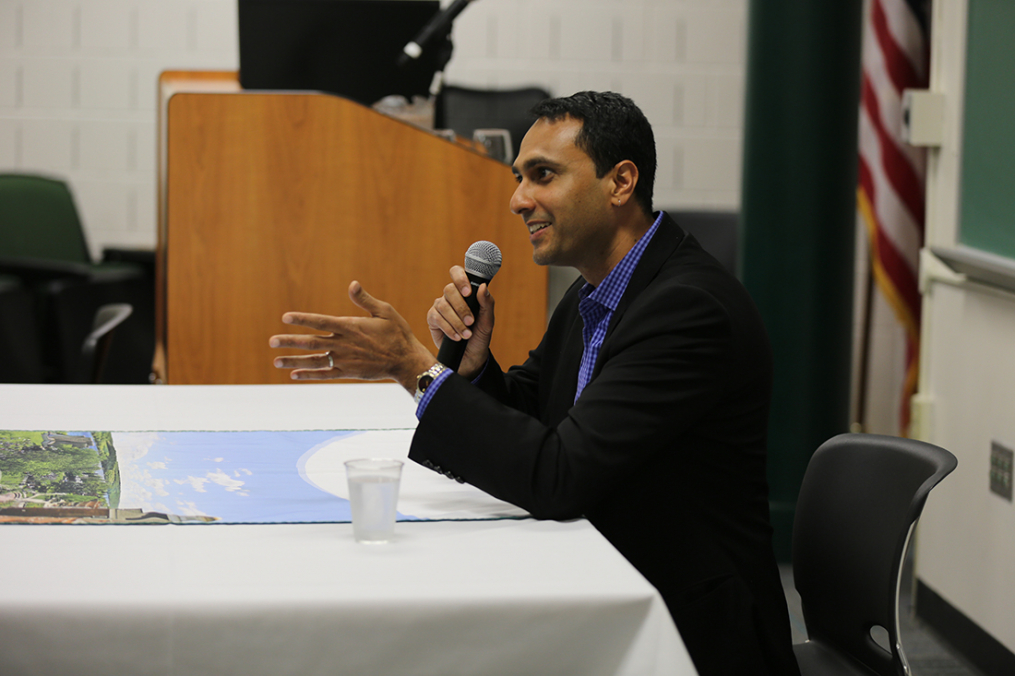 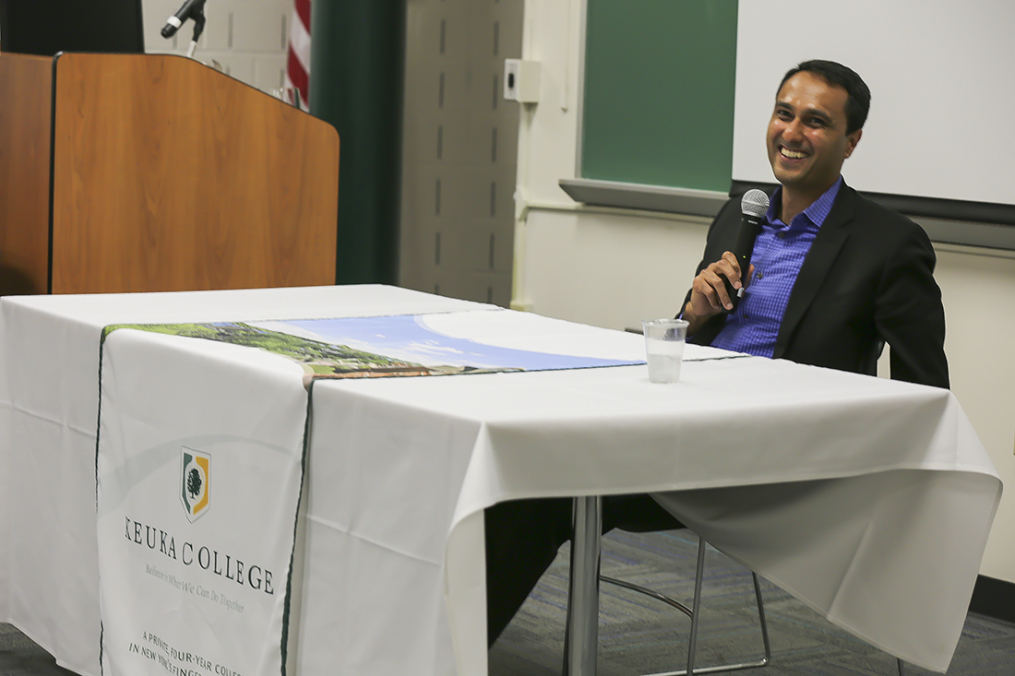 Interfaith Youth Core founder and President Eboo Patel laughs as he takes questions from Keuka College students Friday, May 5, 2017, prior to delivering the 29th Annual Carl and Fanny Fribolin Lecture. 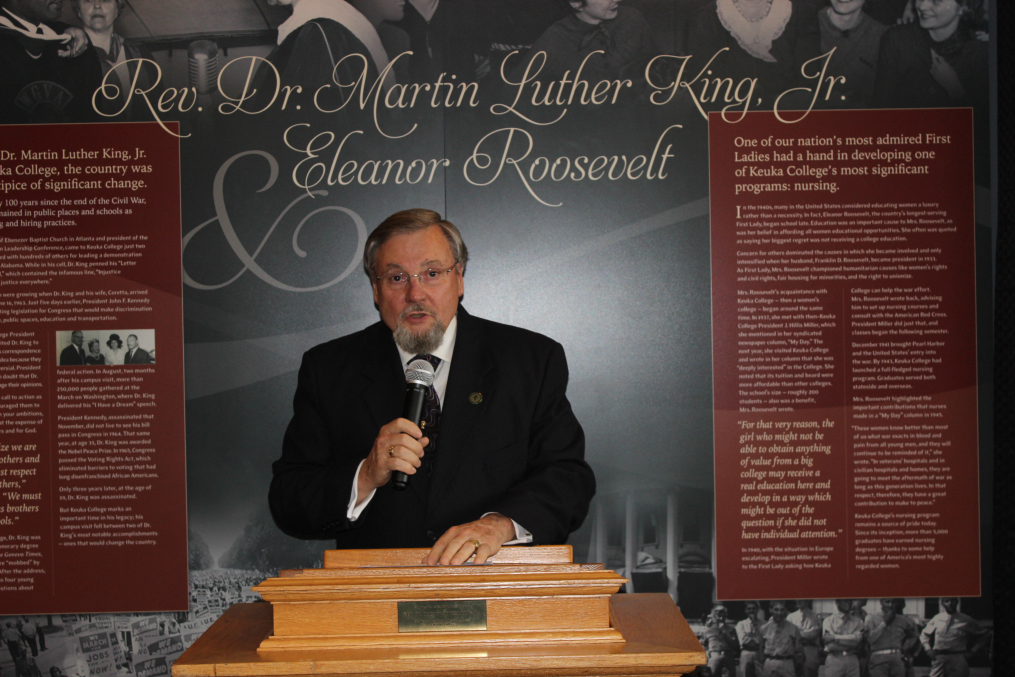 Keuka College Trustee Donald Wertman speaks at the unveiling of sculptures of Rev. Dr. Martin Luther King, Jr. and Eleanor Roosevelt at the Collge's Lightner Library on Friday, May 5, 2017. The busts were created by Keuka College Professor Emeritus of Art Dr. Dexter Benedict and commissioned by Wertman and his wife, Christine. 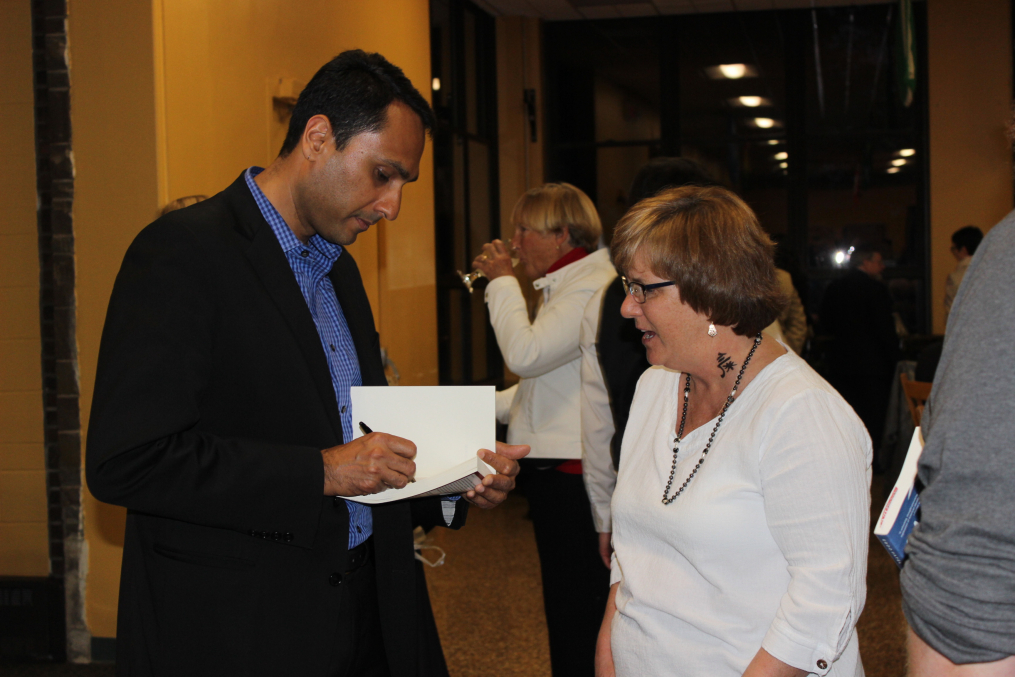 Eboo Patel, founder and president of Interfaith Youth Core, and the featured speaker at the 29th Annual Carl and Fanny Fribolin Lecture, speaks with Stephanie Craig at a reception following the lecture on May 5, 2017. 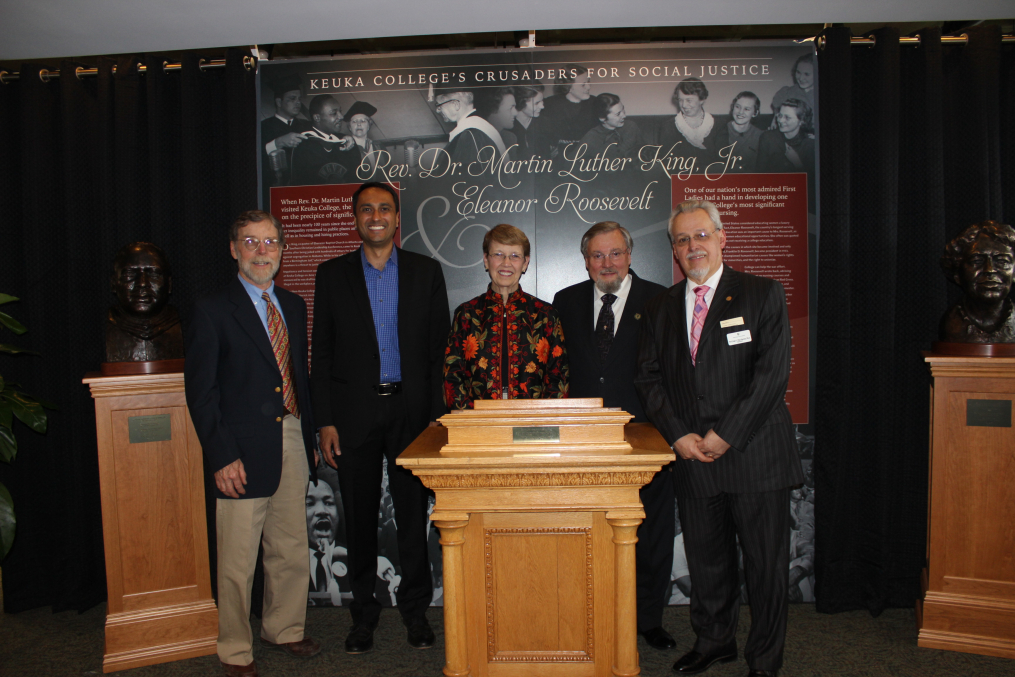 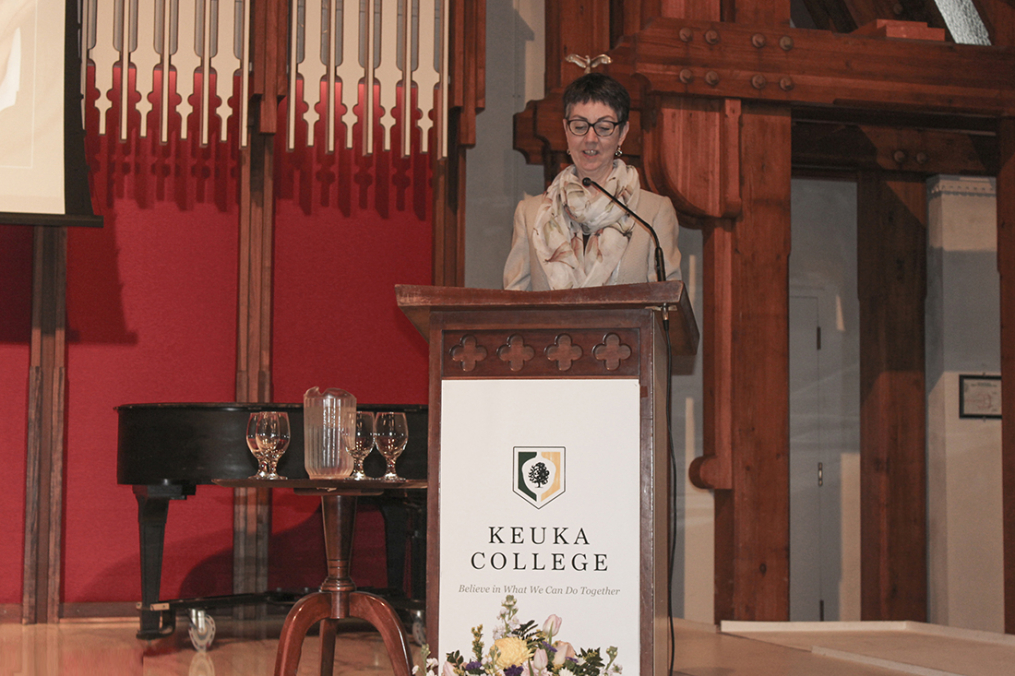 The Hon. Colleen A. Brown, Chief United States Bankruptcy Judge for the District of Vermont, the 29th Annual Carl and Fanny Fribolin Lecture, speaks in Norton Chapel on the campus of Keuka College on Friday, May 5, 2017. 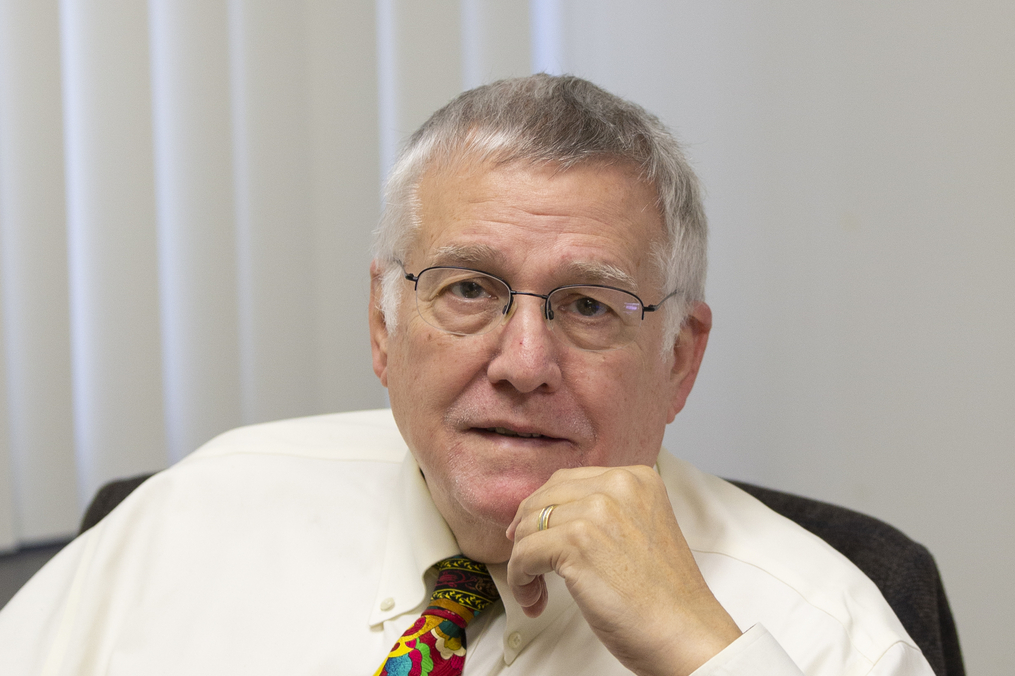 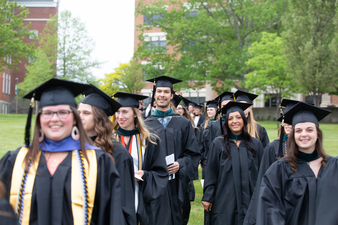